Wonderful news from the UK in the form of a publication of the works of TMJ by The Prometheus Trust with a scholarly introduction by Jay Bregman of the University of Maine.  This will be very helpful in editing the correspondence of Johnson with Alexander Wilder, as the discussions are largely about Platonism and related subjects.

The publisher’s website contains this summary of the book and table of contents.

With a Preface by Jay Bregman

Thomas Moore Johnson (1851-1919) can rightly be said to be a great American Platonist: he was one of a number of men and women of that period who sought to promulgate the philosophy of the Platonic tradition as a spiritual and intellectual discipline. Had not the tide of rationalist and sceptical thinking run so strongly in the last one hundred years, Johnson – along with his fellow philosophers such as Hiram K Jones, William Torrey Harris and Bronson Alcott – would today be recognised as a great contributor to the cause of true philosophy in the modern west.

Johnson edited two journals, The Platonist and Bibliotheca Platonica, between 1880 and 1890, as well as publishing three books in the following years. This book presents much of Johnson’s work during this time – translations of Iamblichus’ Exhortation to Philosophy, Proclus’ Elements of Metaphysics, many of his translations of the treatises of Plotinus (including three which had never before been translated into English), as well as several smaller translations of important Platonic fragments and many of his original writings.

Iamblichus’ Exhortation to Philosophy (or Protrepticus), 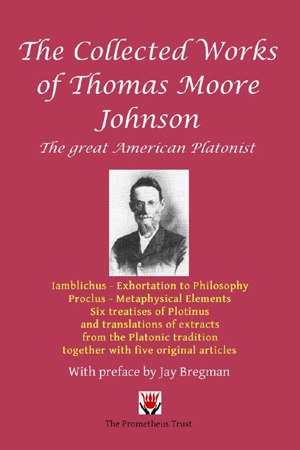 Proclus’ Elements of Theology (or Metaphysics)
Fragments from the Epistles of Iamblichus
Fragments of Ammonias Saccas
Proclus on the Chaldean Oracles
Two Hymns of Synesius
Six treatises from Plotinus’ Enneads:-
On the Nature of Living Itself & on the Nature of Man I, i
On the Essence of the Soul (1) IV, i
On the Essence of the Soul (2) IV, ii
On the Descent into Body  IV, viii
Intelligibles not external to Mind, and on the Good V, v
Diverse Cogitations  III, ix
Original Writings:-
Plato’s Basic Concepts
Plato and his Writings
The Platonic Theory of Education
Plato and his Philosophy
Three Fundamental Ideas of the Human Mind